Here article No 6 in a series of 7 in which Bettina takes a look at Leadership Paradoxes, first published on guardian.co.uk, Thursday 6 June 2013 15.57 BST

If you want to thrive not just survive, embracing the principles of complexity theory can be extremely valuable 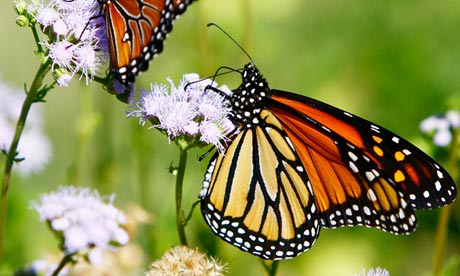 The butterfly effect means one change in part of the system can have a significant impact elsewhere. Leaders need to adapt to this complexity. Photograph: Scott Gaulin/AP

If you are thinking about preparing yourself and your organisation for the future, where do you seek inspiration and guidance? Management gurus or consultancies? Current best practice? Things that have worked for you in the past? That may no longer be enough. While pace and extent of change in fields such as military, communication or transportation technology have increased exponentially in the past few decades it seems leadership assumptions, education paradigms and organisational structures have remained pretty much the same.

Leadership in an increasingly complex world

Why is what we have relied upon in the past no longer sufficient? With unprecedented levels of change come unprecedented levels of complexity. Don’t confuse complexity with things being complicated; the critical difference between the two is that if we apply ourselves we can understand things that are complicated. With a complicated system, we can use its past and current behaviour to predict its future behaviour. The same can’t be said for complex systems – even with an understanding of what happened in the past, it will not be possible to predict the future. In a complex system connections happen in unpredictable ways, with unpredictable consequences.

The internet is one example of a complex system. Through its unprecedented ability to connect people and knowledge, any time, anywhere; it is impossible to predict who a piece of information will reach or what they will do with it. An improbable number of connections and combinations becomes possible.

Next to connectivity and complexity, there’s another “C” that can be thrown into the mix: convergence. In the past you probably had a mobile phone, a camera, an MP3 player. Today you have a smartphone. When you are going to the supermarket, you might buy food, clothes or even car insurance . With boundaries blurring, the number of offerings that no longer fit into existing boxes is growing.

Have existing leadership and organisation models adapted sufficiently? An unavoidable consequence of the accelerating pace of change and the connectivity, complexity and convergence that comes with it, is that what has worked for us well in the past might no longer be appropriate. Predicting the future based on an understanding of the past, seeking the one right way, rather gets in the way of making sense of our future. More so than ever, decisions need to be made instantly, frequently in the absence of the level of information we are used to (and most of us need for our comfort).

In this new reality, where might we find guidance and inspiration? I propose when seeking an insight and understanding of business challenges ahead, we need to put our preference for simplicity and the ‘one right way’ to one side and immerse ourselves in what we know about complexity and chaos instead.

The butterfly effect describes the small change in one part of a system that can have a significant impact for other parts of a system. Think about the behaviour of one rogue investor, the collapse of Bear Stearns and Lehman Brothers in the US in 2008, and how that in turn affected the global financial system. Think of the consequences of natural disasters in one geography for the rest of the globe, such as the tsunami that hit Japan in March last year or the eruption of an Icelandic volcano the year before that. Think about implications of a decrease in the bee population for pollination and consequently food production.

Strange attractors seem to emerge randomly, acting like a magnet and causing order to emerge from chaos. I associate this with the emergence of clusters such as Silicon Valley or Harley Street and products emerging through convergence such as smartphones.

If the butterfly effect and strange attractors are things we can observe occurring in complex systems, there are also some underlying principles at work. Understanding these may help you as a leader to ride the wave of complexity rather than drown in it:

• Support the autonomy and self-organisation of individuals as well as individual parts of the organisation – it is important to ensure that individuals have the necessary skills, awareness and sense of responsibility.

• Ensure diversity, which is a key driver of innovation and minimises the risk of falling into the trap of “groupthink”; here it is important to enable the understanding and appreciation of diversity necessary to achieve superior results.

• Keep moving, be agile and move slowly in order to respond to changes in the environment; this is supported through experimentation, considering failure an essential aspect of learning, and letting go of an obsession with perfection. Think about Google. While its 20% free time rule produces a lot of (fast) failure, it also helps create the successes that has enabled the company to achieve just under $14bn in revenue for the first quarter of 2013.

• Think at the systems level, which is about seeking to understand the implications of our actions, our skills, role and contribution from a wider systems perspective. Nike might serve as an example here with its recent move to help tackle the problems of lack of movement and obesity.

So if you want to thrive rather than just survive (which the great market economist, Theodore Levitt called “a so-so aspiration”), understanding and embracing the principles of complexity theory can be extremely valuable, and by embracing and living by those principles you will be able to achieve what everyone is yearning for: simplicity.