Here article No 2 in a series of 7 in which Bettina takes a look at Leadership Paradoxes, first published on guardian.co.uk,  Thursday 11 April 2013 12.48 BST

Finding the equilibrium in an organisation can be a tough balancing act. What will you need to consider? 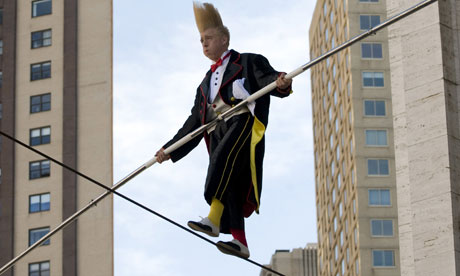 Can you balance opposing operational and innovation without losing your footing? Photograph: Don Emmert/AFP/Getty Images

If achieving innovation and operational excellence is about understanding the importance of diversity – continuity and change is about how to allocate resources across different activities.

There is a need for change: we, individually and organisationally, need to adapt to changing circumstances if we want to avoid becoming redundant. However, there is a balance that needs to be found between change and continuity: if everything were changing all the time we would sink into chaos, not knowing in which direction to go, or what to do first.

Three considerations are important for finding the equilibrium between continuity and change in your organisation:

• A deep understanding of the specific context of your organisation and in which it operates
• Taking a holistic approach
• Being aware of, and working with, all facets and implications of human nature

Geographical context: distance has lost much of its meaning and it is no longer possible to ignore what is happening in other parts of the world. Whether it’s the collapse of financial institutions in the US or a natural disaster in Japan, we are all affected by it. However, while distance may have lost its power, geography and socio-economic differences have not. Take innovations from the developing world such as Tata Nano’s eye cataract operations offered at the equivalent of a few hundred pounds in India, versus a cost of 10-20 times that in the US. No one can assume that these will not have implications for providers of similar products and services in the developed world– the so called “innovation blow-back”.

Industry context: some industries change faster than others. A mobile phone will be superseded within months, car models perhaps in a year or so, while for white consumer goods such as washing machines the renewal cycle could be even longer. Does this mean that you should move at the speed of your industry? No. It is important to understand the dynamics of the industry, not let them be your master.

There are industries in which organisations introduce changes far too rapidly to recover their investment. I would challenge leaders to consider carefully whether they are actually creating customer choice or customer confusion. Have you ever postponed a purchasing decision either because the choice was too bewildering, or you were expecting the next version to be launched soon?

Company context: the first question should not be what shall we change and what shall we continue, but where do we as an organisation want to be in 10 years time and what needs to change to get there? Timeframe and vision will determine what mix of incremental, radical and transformational changes will get you there. You may also have to revisit with who and how you collaborate, where you seek for inspiration, and perhaps even the prevailing leadership models.

Organisations are not an array of separate parts but an interconnected system: changes in one part of the system will have implications for others so we need to anticipate and address these. Creating conflicting goals, particularly at the level of the individual, leads to confusion and indecision. But how can you balance opposing operational and innovation goals? The ultimate objectives should not be different – it is about creating a future; what is different are the skills and mindsets required to succeed in each.

Once you have achieved clarity, the most critical question is how? The best laid plans often fail not because they were wrong, but because they were insufficiently explained and communicated or because they were not open and flexible enough to deal with the unforeseen. Which brings me to my last point, the importance to building the change strategy through and with people, not against them.

It is commonly said that people resist change. I don’t agree with that. People do not resist change, they resist being changed. Participation, having a voice and influence tends to reduce this resistance and we can train ourselves to get more used to change. While our parents and grandparents expected to have a job for life, younger generations expect to have many different jobs, in different companies, countries and industries. What helps to reduce fear of change will vary; some people might be most concerned by absence of information, some might be most worried about what will happen to their relationships or some might be most concerned about the “what next?”

Once we understand what needs to change, by definition, we also know what to keep. Newton’s first law of physics states that it is generally the change that requires energy and effort, not the continuation of something we are used to. It is important to keep an eye on the overall pace of change – not necessarily to match it but to understand the implications of our own choices; knowing where we want to go, and how fast we have to get there, will determine the balance between continuity and change.