Reflections on innovation in the times of COVID

Back in 2011 I was invited to write a White Paper on ‘Innovation and New Ways of Working’, which of course referred primarily to remote working. Until fairly recently remote working as part of normal work-life was considered by many to be impossible. Then COVID happened. McKinsey aptly observed November last year, “The virus has broken through cultural and technological barriers that prevented remote work in the past, setting in motion a structural shift in where work takes place, at least for some people.”

A shift that seemed impossible

All of a sudden remote working was not something to be considered at some point in the future, it was something that had to be embraced and operationalised almost overnight. According to Gartner, 88% out of 800 companies surveyed worldwide made it mandatory or encouraged their employees to work from home after COVID-19 was declared a pandemic. According to The Economist, the shift to remote working had gone better than expected. While they found that employees ended up working longer hours, they also report higher levels of productivity and happiness. To quote from the article, “Before the pandemic,” says Monica Kang, founder of InnovatorsBox, a workplace-culture firm, “we forgot that people are people first.” I certainly agree that seeing people in their homes, with children or pets occasionally coming into view, has made us all more human, yet whether that translates into people finally being treated like people, rather than numbers, I very much doubt … When it comes to productivity, there definitely are indications that is has not suffered: Forbes, reporting the finding of a recent survey of 9,000 managers and employees across Europe, stated that 82% of executives saw levels of productivity stay the same, or even increase.

Will working from home become part of the ‘new normal’? There are certainly quite a few organisations who have set plans in motion to continue remote working beyond the pandemic – Build Remote have published a list that shows organisations that have publicly declared their intentions concerning remote working. While some indicate that remote working will be optional, others are clear that it is their first choice.

Is this really what we want?

Is another step into the virtual world really what we want, especially given what we know from social media: it gives us the illusion of connectedness while in reality we feel more lonely and disconnected than ever before? I certainly was rather dismayed when I heard that a large German-headquartered engineering company declared that all training would henceforth take place online only, no exceptions…

While I can see that the transmission of fact-based or technical knowledge can work quite well online, ie what I would consider to be unidirectional knowledge transfer, I very much doubt that this really works when it comes to acquiring soft skills, developing emotional intelligence, or communicating content that triggers concern or outright fear, such as the announcement of change.

While the type of content is one aspect to consider, a question that goes alongside it is, whether remote working is possible and appropriate for all industries. Managing manufacturing plants remotely seems tricky, yet with automation, robotics and remote control systems, perhaps even that is possible. I mean, even wars can be conducted remotely, with drones even deciding autonomously whether to strike or not; the New Scientist reported in May this year: “Military drones may have autonomously attacked humans for the first time ever last year, according to a United Nations report. While the full details of the incident, which took place in Libya, haven’t been released and it is unclear if there were any casualties, the event suggests that international efforts to ban lethal autonomous weapons before they are used may already be too late.” You may also want to check out this article in the Nato Review.

The question of appropriateness for all industries was also raised by McKinsey, who point out that, for example, education and the judiciary report a loss in quality. When educators were scrambling to transfer learning content online, due to lack of experience and time available, much seems to have been a ‘copy paste’ job of the off-one content – which clearly does not work. Online, offline are two entirely different contexts; the differences need to be clearly understood, and addressed accordingly. How we communicate, how we engage, how we interact needs to be reconsidered – and we are clearly not there yet: according to Forbes, 61% of managers participating in a survey reported that they did not quite know how to effectively delegate and empower virtual teams, nor how to ensure that there was a shared sense of purpose.

Special attention should be paid to the fact that a huge part of what is communicated and received is non-verbal. How well can we read body language or even tonality in a virtual context? Especially when whom we see, how well we see them, and even whether we are able to see everyone on the call is generally out of our control? Most virtual meetings I have been part of are characterised by people turning off their camera, be it for technical or quality reasons, or because they would rather others don’t see what else they get up to during the call.  And here I have to look in the mirror myself …

So what does it mean for innovation?

While some experienced a kind of democratisation of contributions, where everyone’s ideas and inputs are being heard, which ought to be positive for innovation as great ideas can come from anyone, anywhere, others declared brainstorming to be the most challenging type of meeting in a remote work context.

We all know that idea generation and brainstorming are only part of the innovation journey, yet it seems that innovation over all has suffered. Research commissioned by Microsoft, conducted by Boston Consulting Group and KRC Research, found that 56% of executives considered their organisations to be innovative with products and services in 2019, in 2020 this figure had dropped to 40%.

This should not come as a surprise as we know the following:

That innovation in a virtual context is possible has been shown, for example, by the successes we see on open innovation and crowdsourcing platforms.  You may also want to check out an article in the Sloan Management Review, in which they report on a study that looked at 1,000 innovation leaders across 17 countries between April and August 2020 to understand how and why these innovations occurred.

Some of these innovation leaders were successful innovating during COVID, others were not. It seems that those who succeeded were drawing heavily on open innovation principles, ie using virtual platforms on which “users can function as buyers and sellers, readers and writers, consumers and creators — a growing behavioural trend referred to as prosumers, individuals that blur the line between production and consumption activities.”

The table below (from my 2011 White Paper) summarises how and where ‘new ways of working’ manifest generally, as well as some resulting advantages and disadvantages for the specific context of innovation: 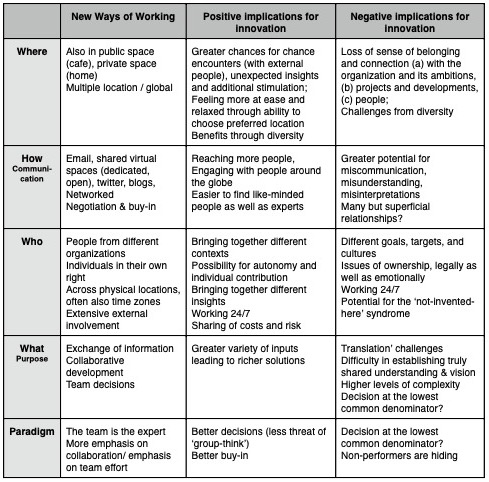 So while clearly, innovating in a world of remote work is possible, for me, the questions remain:

… and me, personally, I still so much prefer face-to-face…

Perhaps you are also interested in an interview I gave on innovation in a VUCA world, in which we also briefly talked about  COVID, conducted by Eugene Hoeven in May 2021. You can listen to the interview on Eugene’s website, or read an edited version here.

This article is based on my ‘regular irregular’ mailout from the 20th August 2021.

I’d love to share a reaction to the above article – with which I whole heartedly agree.

I have worked virtually for about 15 years.  I’ve managed a large team and been pretty effective (though nothing in management is perfect!).  Many of the obstacles you list are pretty easy to overcome, but managers do have to be intentional.  Virtual work is different than face to face so techniques used must also differ.