Recently I had the wonderful opportunity to attend a concert of the Berliner Philharmoniker, life, in their inspiring concert hall in Berlin.  Listening to Rachmaninov’s 2nd piano concerto played outstandingly by Kirill Gerstein (conducted by Semyon Bychkov) I was reminded that classical music taught me the first lesson in leadership.  At the age of around 16 I got my first classical LP (for those of you who remember … also known under the name ‘vinyl’),  Tchaikovsky’s 6th Symphony played by the Berliner Philharmoniker, and conducted by Herbert von Karajan. I thought it was quite a nice piece of music.

Then, probably a year or so later, I was with a friend who played this amazing piece of music for me, full of energy and passion; I was blown away.  What, I asked, was that?  Tchaikovsky’s 6th Symphony, he replied.  Seriously?!  I had been listening to the same piece of music and it had left me untouched – it was nice, but nothing more. What was going on?  It was the same piece music, a similar set of professional musicians, yet in one performance the music had felt so different: engaging, emotional, inspiring, energising! (In case you are wondering who the conductor was, it was Sir Georg Solti.)  That’s when I realised the importance of a leader, and the difference he or she can make.  Since then it has been my belief that it is the leader who shapes and makes an organisation’s culture.  Though what is true for leaders at the top of organisations is true for leaders at all levels, be it the department or a team – or a meeting.

More recently a shift has occurred …  I still believe that leaders play a critical role, yet my outlook on how great leadership manifests itself has somehow changed.  In the past I would have emphasised the role of the leader in defining the ‘what’ and the ‘how’ for an organisation.  Today I believe that it is more about providing a direction and inspiration,  then enabling and empowering employees and creating the conditions in which things can happen, otherwise (almost) standing aside. Interestingly, it is again the Berliner Philharmoniker who shaped this thought. This time it was through their Film “Trip to Asia: The Quest for Harmony”.  This movie is about their tour of Asia, and in one of the scenes  you can observe the musicians at rehearsal; at some point conductor Simon Rattle leaves the podium to sit down in the auditorium, observing and listening as the musicians are playing on, perfectly, together, beautifully and expressive. Clearly, each musician had such a deep awareness and understanding of the vision for the piece of music, was highly skilled and in tune with his / her colleagues that the leader was no longer needed; as each and everyone had the willingness to take responsibility for their own and the collective action, the leader was able to step away.

Why is this shift important to me? Why my promotion of this ‘transposed’ perspective on leadership?  Plain and simple, in the VUCA (Volatile, Uncertain, Complex, Ambiguous) world of the 21st century we can no longer rely on our leaders to make all the decisions and tell us what to do; we cannot delegate all responsibility and excuse inaction with not having been told what to do; our 21st century context is too fast moving, too complex for such a mindset.

The military has long since learned that long lines of command and control do not work in a highly complex and interconnected world, where ‘orderly’ battles have been replaced by guerrilla and terrorist warfare. Of course, the critical element is that those entrusted with responsibility have both the capability and willingness to embrace it.  Hence the challenge for leaders today is no longer to identify which ‘best practice’ their followers should follow; it is to ensure their followers have the appropriate skill- and mindsets to create leading practice, and thus enable them make the best possible decisions at any point in time.

Is such leadership reality today?  Looking at recent reports on levels of engagement I don’t think so. For example, based on the annual Gallup Engagement Survey only 16% of employees in Germany are engaged.  In the US it is 3 in 10. Why levels of engagement are critical becomes clear when we look at the two aspects of engagement: the emotional aspect, i.e. taking pride in working for a company, and the rational aspect, i.e. understanding how one’s job fits into the ‘bigger picture’.  Without the former we have no willingness, without the latter the ability is in question.

How to ensure that followers are emotionally engaged and have a sense of direction? 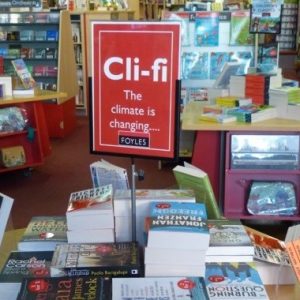 One way to engage and inspire followers more is certainly by telling stories (rather than sending memos). You can find an interesting article on how Sainsbury uses story telling in the context of sustainability on the edie.net website.  Perhaps it is the context of sustainability that is particularly literally inspiring? Looking at the display of famous bookstore Foyles on Cli-fi, thrillers set in a world if climate-caused turmoil, this may well be the case!

If you are interested in finding out more about leadership styles that are more suited to the VUCA conditions of the 21st century here two books and tools by Friends of the ILF: the first is ‘Complex Adaptive Leadership’ by Nick Obolensky; the second is ‘The Art of Leading Collectively – Co-Creating a Sustainable, Socially Just Future’ by Petra Künkel.  Watch the space on the latter as Petra is currently working on an app that makes the tool accessible and usable everywhere and any time.

Let me close with one of my favourite quotes on Leadership by London Business School Professor Emeritus Rob Goffee:
“Leadership is about inspiring others to higher levels of performance.”
Does your leadership live up to that?

The above is part of the Innovation Leadership Forum’s April Mailout.