No More But(t)s – Or The Joy Of Embracing Paradoxes 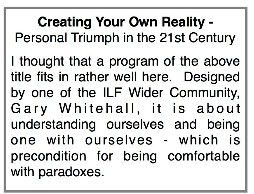 For a while now I have made a conscious attempt to live without one little  word that seems to cause a lot trouble and tends to act like a led balloon: but.  It is not that I am not using the word at all, it’s just that I question when ever it pops into my head whether it is truly warranted.

I got sensitised to the impact of the word in the particular context of innovation and idea management where there’s nothing that sucks energy and enthusiasm out of a passionate person faster than the word ‘but’.  Who has not experienced the excitement of sharing an idea or suggestion just to be deflated in no time flat by the response “interesting” or “great” followed by ‘BUT’.  (Those people have probably learned to say something positive before delivering the terminal blow).  It leaves us feeling that our idea is a no-go and, most likely, results in us immediately become defensive which in turn means our mind closes to any suggestions for improvement, alterations, or new directions. 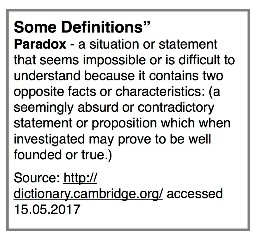 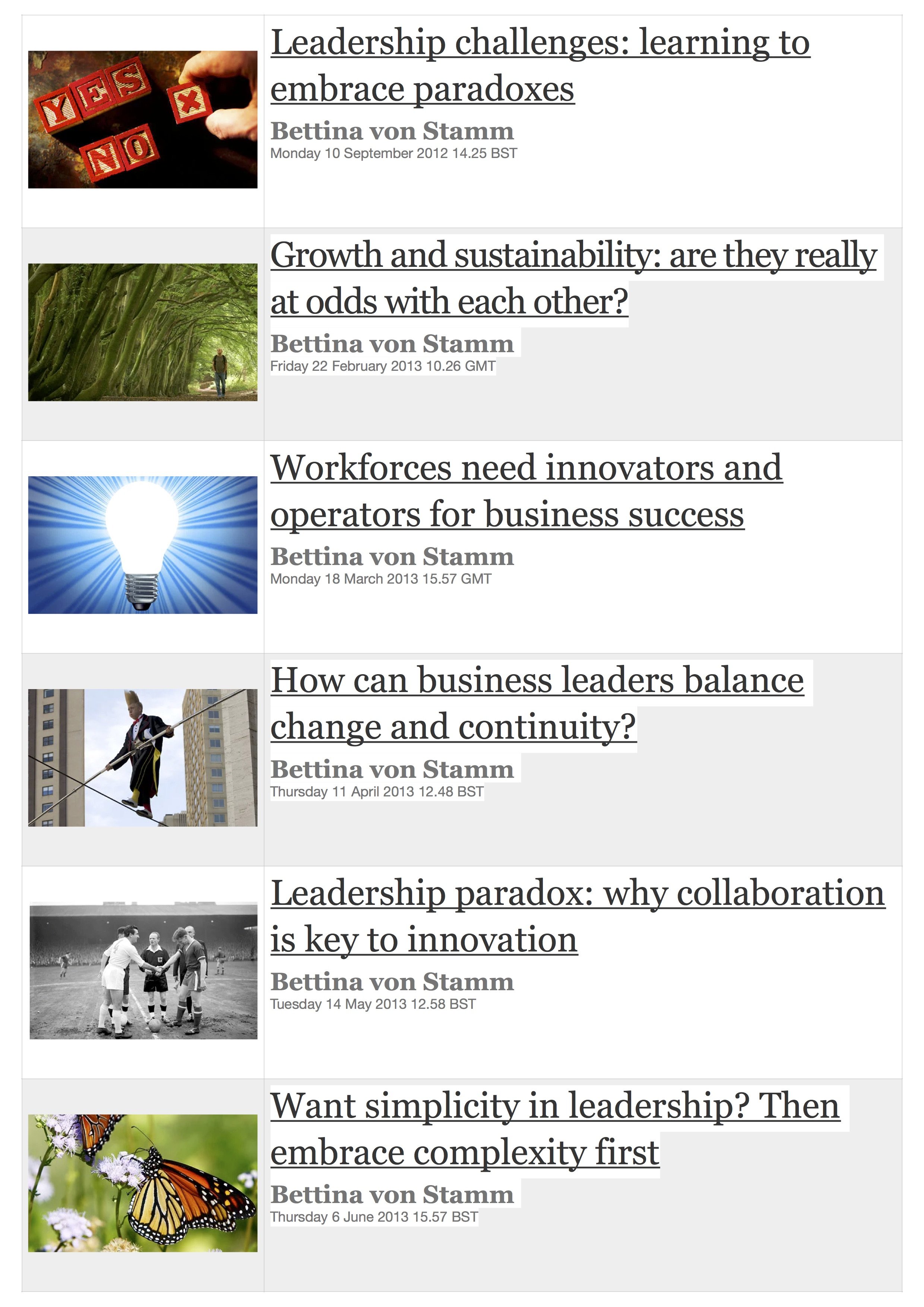 There are plenty of things most business leaders will consider to be contradictions, to be paradoxes; to name but a few: (which I have also written about in a series of contributions to the Guardian back in  2012/13)

Thing is, if we were able to concentrate on one or the other in the last century, this century has no time for ‘either or’.

This is a challenge as the dominant mindset, shaped by our education (see previous mailout) does not encourage us to embrace paradoxes and accept that two (or more) states exist at the same time.  We prefer things to be in one box, not many, certainly not at the same time; that’s how our brain works and we cope.  We want to know what is right, and what wrong, what the best way is; we feel things should be either white or black – yet they are not.  Or at least, not many things are.

For me ‘but’ belongs to a mindset that thinks in ‘right or wrong’, and ‘black or while’.  Such a mindset seeks the ‘one right answer’, ignoring that for most things there is only ever a ‘most appropriate’ or ‘best possible’ way, given the particular context and specific point in time.  The closer and the more I look the less I can find absolutes that cannot be swayed by context and / or time. 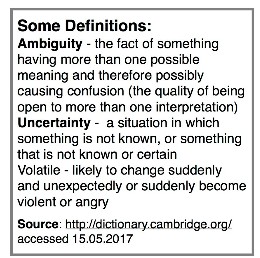 ‘But’ belongs to the world of ‘either or’, to the world of linearity – which is to say, it belongs with the awareness and understanding of the 20th century.  As I  like to say, ‘That is so last century!’  The reality of the 21st century is different. With the deepening of our understanding of quantum physics the curtain of an illusion of linearity, certainty and control is being removed, to reveal an underlying web of complexity, uncertainty, ambiguity and volatility, VUCA for short.  Well, in my order it would actually read CUAV as ‘complexity’ is for me the most critical factor out of those 4, and partly driving the other three, which is why I put it first. 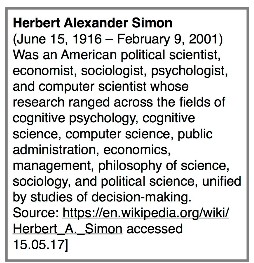 Key differentiator between linearity (and simplicity) and complexity is not an increase in parts that need to considered per se, but in the interdependence between and interconnectivity of such parts, and a resulting impossibility to take the system apart.  Well, we can take it apart but (yes, ‘but’) it will be at our  peril as by taking it apart we will forgo the ability to gain insights into how the system truly operates as this is driven by the interactions between the parts.  As Herbert Simon put it, “Complex systems are systems that are made up of a large number of parts that interact in a non-simple way.  In such systems the whole is more than the sum of the parts, not in an ultimate metaphysical sense, but in the important but pragmatic sense that, given the properties of the parts and the laws of their interaction, it is not a trivial matter to infer the properties of the whole.”

If you doubt that all IS connected, have a look at this video [I will probably mention it again because it is just so beautiful, and resonates as essential truth].

This is why I always like to emphasise the difference between “complicated” and “complex”.   A complicated system we can take apart, no harm done.  On the contrary, taking it apart will probably help us understand how it works, and the great thing is, that understanding will help us predict, with certainty, how the system will behave in future.  Not so with a complex system. However long we study and analyse it, and even if we are able to gain insights into its past behaviour, we will struggle to predict how it will behave in future. In a complicated world we survive by planning, in a complex one by allowing for emergence, and co-evolving. 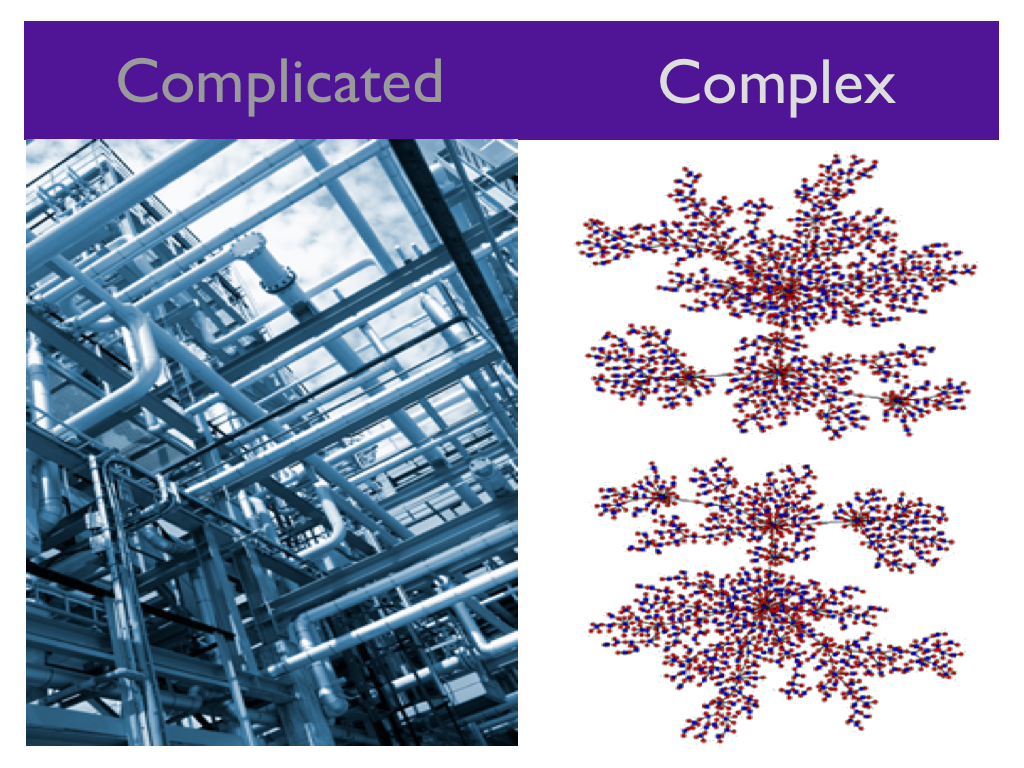 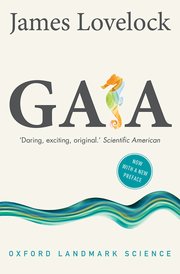 This means that a shift in thinking and mindset is required.  In order to truly arrive in the 21st century the shift required is from Descartes worldview, signified by clock-analogy-thinking,  to embracing the insights offered by quantum physics, namely that certainty, control and predictability are but an illusion.  As James Lovelock writes in his book ‘Gaia’, “Certainty is the smog that chokes the world of ideas.” – I would actually argue that it is not certainty itself but the belief it exists and the human desire for it that is the problem.  As to control, if you think about it, the only that that IS well and truly under our control are our own actions and reactions – have a look at this video. 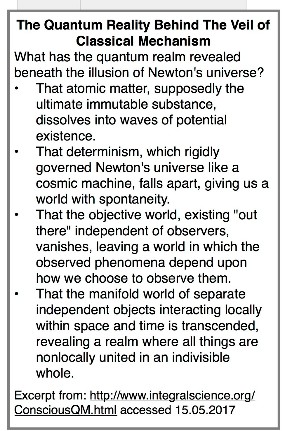 Why am I on about it, and is all this really important in the context of innovation?  Perhaps it is just an opportunity to focus on one of my favourite topics, complexity (indeed, the title of my PhD thesis was: “The Effects of Context and Complexity in new Product Development”, 1998, London Business School)?  On the other hand, it might be rather obvious: complexity, uncertainty, ambiguity, and even volatility, sounds a bit like innovation, doesn’t it?  If you’d like to read a bit more about ‘Ambiguity, Friend or Foe of Innovation’ you may want to read the Notes from an Innovators Anonymous meeting held back in June 2011.

To thrive in the 21st century requires us to embrace paradoxes, and in the process we will probably realise that upon reflection and closer inspection many of those things we consider to be paradoxical are not, and that it is our habits and assumptions that make us believe that it is so.

One such assumption is that we need to work harder and longer to be most productive – working less to achieve more and better results seems an paradox.  Yet increasingly research indicates that this might just be the way forward.  Have a look at the infographicput together by Tiffany McAdams, member of the ILF Wider Community.

I believe that amazing things can happen when embracing paradoxes and allowing two (or more) states to exist at the same time.  Nature inspires us with an example of extraordinary beauty: a rainbow, which can only happen if we have both, sunshine AND rain. 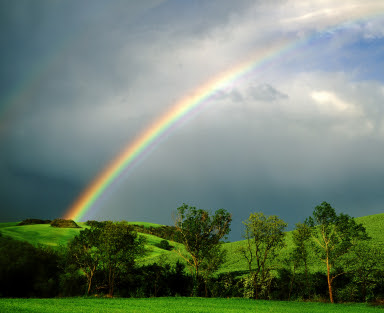